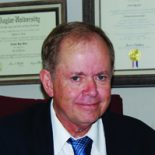 My Life Leading Up To Law

Claude was born in Abilene, but has lived in and around Waco since moving here in 1964 to attend Baylor Law School. He is the proud father of nine children (his youngest being born in 1980 and oldest in 1962). His family and playing poker are his main interests when I am not practicing law.

After graduating from Abilene’s McMurry University in 1964, Claude worked as an aspiring rancher and farmer on his wife’s family ranch in Throckmorton (it’s about halfway between Wichita Falls and Abilene). It didn’t take long for his father-in-law to realize that his days as a rancher and farmer were numbered. After a series of blunders, it was confirmed that Claude truly was a very bad rancher, and he was both eager and encouraged to enroll in law school. His wife and he were quickly packed and escorted to Waco’s Baylor Law School campus a full month prior to the first day of the fall semester of 1964.

From Associate to Partner

Upon graduating and passing the Bar Exam, Claude immediately began working as an associate at Edwards & Faulkner. In 1970, they made him a junior partner, and in 1971 Dan Makowsky (who would later be his law partner for 16 years) joined the firm. Claude and Dan decided to break away from Edwards, Faulkner, Giles & Makowsky in 1977 and start thier own firm.

They practiced together until 1993 when Dan retired from actively practicing law. Claude practiced on his own for 15 years until his son, Lewis, joined the firm in 2008. In 2009, Lewis was made partner and the firm became Giles & Giles.

Claude has  always enjoyed practicing law – especially defending clients in criminal cases. He has worked on as many as 5 murder cases in one year and has worked as the lead attorney in murder trials throughout his legal career. He has also handled countless divorce and custody trials. In working with clients, Claude places honesty and fairness above all else.

While at Baylor I joined as a member the Delta Theta Phi Law Fraternity as part of the Alexander Chapter. In 1972, I was named a Counsellor of the Baylor University School of Law by the Baylor Law Alumni Association and was also elected into the membership of the Texas Criminal Defense Lawyers Association. In 1977 I received an Acknowledgement from the Texas Law Center for the administration of justice in the state of Texas.